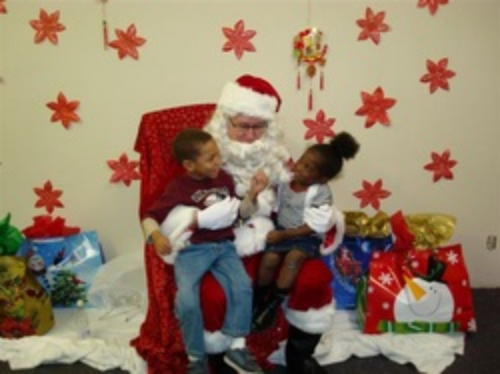 Perhaps our late president said it best, and George Molsbarger is a fine example of today's modern philanthropist. The successful, longtime business consultant is probably best known for creating amazing billion dollar deals with America's Fortune 500 companies and raising millions for numerous start-up enterprises. In his spare time, Mr. Molsbarger likes to remember how blessed his life has been and generously gives back to others, namely children, in a major way. People have taken notice, and in 2010, Mr. Molsbarger was named "Man of the Year" by the Golden State's Glendale Hart Foundation.

The prominent southern California businessman is proud of the time and effort he has made to ensure that children are not forgotten during the magical time of Christmas. Every holiday, George transforms into St. George, a cousin of good old St. Nick and plays Santa Claus for those young souls who otherwise, might not ever see the joys of the holiday season.

Mr. Molsbarger goes out Christmas shopping for children and enjoys finding the right toys and things that will bring smiles to the young faces he feels lucky to know. Then, he dons his traditional red Santa suit with the famous black boots, red cap and wonderful white beard and sits down to greet the children who come his way. Santa George has a blast passing out his presents and taking an active interest in these children's lives. It's a really good feeling when you can help someone who just needs a break and send a little kindness their way.

Mr. Molsbarger is busy with a number of social organizations, including one close to his heart, the famous Squid & Squash Foundation he established in 2005. The organization has been cited as an original and inventive foundation, donating millions of dollars to improve the education and lives of underserved children. The non-profit is defined in three ways: philanthropy, volunteerism, and grantmaking.

The Squid and Squash Foundation is aimed at helping at-risk youth in Los Angeles and surrounding metropolitan communities. The foundation is proud to support worthy charities like these: A Better L.A., A Place Called Home, American Tall Ship Institute, Earthwatch Institute, Heal the Bay, Homeboy Industries and several others.

Mr. Molsbarger summed it perfectly in this way: "Our goal is to make a difference in the lives of youth and help them SEE and BELIEVE they, too, have a voice that can create change."